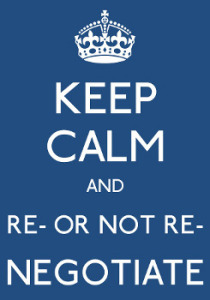 Sometimes there are situations that you win your negotiations and you really can’t be more happy, but the other side goes back to their office and realize that they wanted something completely different. Here are few points – what to do if they demand a renegotiation of the deal.

Many people makes mistakes and become angry at such situation with the other side and starts to claim that it is immoral to sign the contract and few days later want to renegotiate it again. The problem is that such communication and response to the other side action are not effective in such situations. The opposite side already knows, they are loosing the face, so they have to be really determined to do the renegotiation. Being hostile towards them will not help and could end up in canceling the contract and court wars.

Renegotiating doesn’t have to mean negotiating everything again. Talk to the other side and find out what they don’t like in the signed agreement and what do they want to change. Sometimes it could be small thing, which is irrelevant to you.

Stop acting emotionally and think how much is worth the relationship with the other side. You can always not agree to start renegotiations, but it could lead to lawyer war, which is always a lengthy and expensive process. The other side will not do things which were signed in the contract and you or your company would only loose time on fighting and showing that you were right. You could probably get satisfaction later, but you will loose time and money. Is it worth it?

Willingness to renegotiate a contact often corresponds to the value of one side attaches to a potential future relationship with the other side. If this relationship and possibilities are worth more than your claim for violating the contact, you should be willing to engage in renegotiation process. How many times you changed your mind about something and so can other people. However if you conclude that your claim is worth much more than the benefits of future possibilities and relationship, you can start contacting your lawyer.

Everyone wants to be important person and respected for his job. This works especially with bigger companies, where there is often a rat race. Sometimes the other side wants to renegotiate, cause one important person didn’t have his part  or confirmation in the original agreement. Communicate with this person, find a way to show how much important he is, appreciate his part of the job and you can be surprised how fast the other side can forget about renegotiations.

If you see that situation is not going into the right direction and both sides starts to yell at each other and act too emotionally, you can consider hiring a third neutral person. This mediator can help both parties with overcoming obstacles to a satisfactory renegotiated agreement.

First thing which comes to the mind when you hear about renegotiation is that the other side wants to gain something more and this will end with loss for you. This gives you a very bad attitude towards renegotiating anything in the contract, but instead of focusing of what you might loose, focus on what you might gain. Sometimes even if you feel forced into a corner, the new approach to renegotiation and seeing opportunity in it could work out pretty well.

How to write a title for press release?

We live in a world of constant informations flow and every single one of them is trying to get into our head. That is…